Through the first analysis and judgment of the 360 security team, these cyber attacks may be aimed at causing chaos in Ukraine, hindering communications, and weakening Ukraine’s government, civilian and military institutions. It is a long-planned cyber war. This analysis report will analyze the key technical details of this cyber war from the global perspective of 360 Security Center.

The National Cyber Police Service of Ukraine issued a security notice. On the evening of January 14, 95% of the hacked Ukrainian government websites were back to work. However, more serious destructive attacks than modifying the behavior of the website pages are still going on. Since that night, some Ukrainian government agencies have been subjected to violent DDOS attacks, and at the same time, there has been data erasure and destruction disguised as “WhisperGate” ransomware. malicious sample attack.

According to the official description, the relevant APT groups are using a combination of supply chain attacks, OctoberCMS (a CMS program widely used in Ukraine) exploits and Log4j vulnerabilities to conduct a combined cyber-attack sabotage campaign.

U.S. CISA issued a security notice related to the Ukraine ransomware attack, stating that organizations in Ukraine suffered a series of malicious network incidents, including DDOS, website hacking and potentially destructive malware, of which destructive malware is the most worrying, because Historically, there have been destructive attacks suspected of counterfeit ransomware, such as NotPetya and WannaCry, causing widespread damage to critical infrastructure. CISA requires every organization in the United States to take immediate, urgent steps to mitigate the impact of a potentially damaging attack.

The security community is starting to notice that Ukraine has begun spreading new data-wiping malware, HermeticWiper.

Before and after the first wave of WhisperGate attacks, 360 Security Center’s network-wide view observed that the attacks began on January 10, until January 15, when Microsoft said that it found that APT groups had delivered WhisperGate samples to some important institutions in Ukraine, and the destruction of related samples The action encrypts the disk MBR and files of the specified type on the machine.

Stage 1: Overwrite the MBR and destroy all partitions

Stage 2: Download Stage 3 via CDN hosted by the Discord service

According to the global vision observation of 360 Security Center, some specific attack process chains of WhisperGate are as follows:

The security community first noticed the HermeticWiper attack on February 23, saying that the APT group delivered HermeticWiper to hundreds of organizations in Ukraine for a second sabotage attack.

According to the global vision observation of 360 Security  Center, some of the attacks were initiated by planned tasks, which were suspected to be delivered and implanted by controlling intranet domain controllers and exploits of different network services.

According to the analysis and deduction of the 360 Advanced Threat Research Institute, large-scale sabotage attacks implemented in cyber warfare are very likely to spread to the world because they are not under the control of the attackers, and relevant organizations need to be vigilant.

At present, there is no publicly disclosed cyber intelligence on cyber warfare supply chain attacks against Ukraine, but as early as 2017, “NotPetya” suspected of disguising as ransomware used software updates to launch supply chain attacks, and related attacks first became popular in Ukraine This complex supply chain attack method caused 80% of Ukraine’s enterprises to be attacked and damaged by “NotPetya” to varying degrees.

Unexpectedly, “NotPetya” is still spreading around the world, disrupting key IT systems of international shipping and logistics companies such as Maersk and TNT, and having unplanned and far-reaching impacts on global supply chains.

Within a day of Ukraine being attacked by cyber warfare, the US CISA issued a national security warning, warning US organizations not to be affected by ransomware and related supply chain attacks. Vigilant and advanced cybersecurity defense awareness. 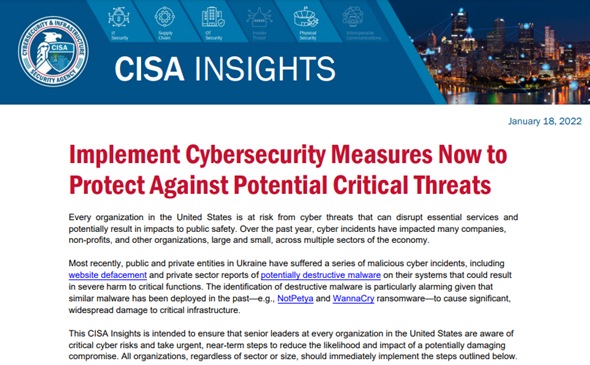 According to the global vision of 360 Security Brain, starting from the end of 2021, a large number of Ukrainian users have been attacked by malicious document spear phishing from suspected APT organizations. The attackers use decoy documents to release and execute vbs scripts, and complete malicious documents by creating scheduled tasks. Most of these vbs file names end with .log and are highly obfuscated. The size and activity of affected users of the related attack surged and peaked on February 21 this year:

Through the analysis of the cyberspace asset mapping data of 360 Security Center, the Ukrainian government website has used a website building program called “octobercms” on a large scale. Ukrainian authorities have noted that a vulnerability CVE-2021-32648 in the OctoberCMS content management system (CMS) platform has been widely exploited, allowing attackers to directly gain administrator privileges on a website. In addition, there are also some log4j exploits that have been officially noticed.

Based on the analysis and deduction of key technical details, 360 Advanced Threat Research Institute believes that this attack is a major and destructive cyber warfare attack against Ukraine. Combined with the global vision of 360 Security Center, most of the attack can be deduced The process and key details of this cyber attack are still evolving, and it is very likely that organizations outside Ukraine will be affected. Relevant organizations need to be vigilant.

In the digital age, cyber warfare will become the first choice. Cyber warfare attacks are not only for the purpose of stealing intelligence, but can also cause damage to infrastructures such as transportation, energy, and finance. Any node may become a springboard for attacks, which can lead to serious consequences. For this reason, we must be aware of the network The severe situation of the war, face up to the network war!

Behind the “disconnection” caused by the cyber attack in Ukraine this time, it is undoubtedly not revealed that the new type of cyber warfare already has physical attack capabilities. That is to say, a network attack has the ability to turn the blow of the traditional virtual world into the actual damage of the physical world. The attack speed is fast and the effect is strong, but the cost, movement and controllability are much better.

The characteristics of the new type of cyber warfare can be summarized as “seven majors”, that is, the battlefield is big, the opponent is big, the means is big, the challenge is big, the goal is big and the harm is big. In the future, cyber warfare will become the biggest threat in the digital age.

In addition, judging from the Ukrainian Ministry of Defense’s call to help defend against possible cyber attacks on Ukrainian critical infrastructure, cyber warfare targeting urban infrastructure will become more frequent in the future.

The interconnection of all things in digital cities, the increase in the number of intelligent terminals and network users, the wide range of data sources, the diversification of data, and the complexity of data structures make it difficult to maintain various key information infrastructures that carry urban operation data, resulting in the construction of network security and operational risk.

At the same time, the vulnerabilities of various software and hardware systems of critical information infrastructure are also difficult to avoid being exploited and attacked. Therefore, it is necessary to strengthen the top-level design and overall plan of cyber warfare defense for digital cities, build a combat-oriented defense system and an emergency response system, and make every effort to ensure the security of digital cities.

More notably, the swift warnings issued by the U.S., large and small, ensure that senior leaders in every organization are aware of critical cyber risks and take urgent steps to deal with them. If working with Ukrainian organizations, pay extra attention to monitoring, inspecting, and quarantining traffic from these organizations; closely scrutinize access controls for these traffic.