July 17 afternoon, the highly anticipated 2014 SyScan360 “Tesla crack challenge” concluded on a good note. After a fierce battle that lasted almost two days, two students from Zhejiang University with the group name “Yo” won the first place prize money of 10,600RMB. However, no one was able to achieve a successful break, so nobody was able to take home the grand prize money of 10,000USD. 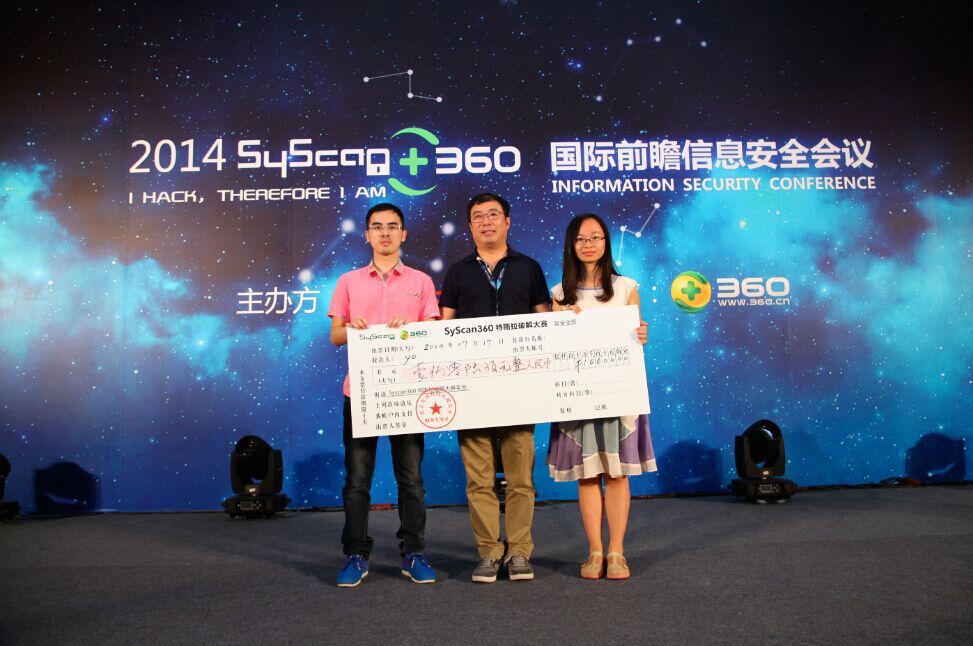 The Tesla Challenge attracted many security and Internet enthusiasts’ attention, and so did last years. A total of 9 teams participated in the event including Institute of Software, Chinese Academy of Sciences and other notable research institutions. Universities were also involved and competed rigorously as well. The 9 teams attempted to crack internets security loopholes, on the leaderboard, Zhejiang University’s team of “yo” led the way, trailing behind them was Wild wolf team#3 and Wild Wolf team #1. Both with around 600 points placing them respectively at 2nd and 3rd place. According to the rules, the points earned can be redeemed as cash.

After the competition, Qihoo 360’s president Qi Xiangdong went to the site and congratulated the winners and present them with awards. Qi Xiangdong later on gave a speech and said that the purpose of the event was to remind major car manufacturers to emphasize the need to watch out for product safety issues. He also calls for security vendors, car manufacturers, and major technology enthusiast to work together, hand in hand to prevent safety issues within intelligent vehicles. He also said, “Only users of the products proposed more stringent requirements, which will give security vendors and products a boost it needs, ultimately resulting in the better research and better problem solving.

Car networking and security is becoming more and more popular, and so are smart cars. In SyScan360 opening ceremony, SysScan360 Chairman Thomas Lim said that the next attack against smart devices will be more and more dangerous. Once the Smart car vehicle system was hacked, hackers were able to remotely open the car door, which threatens the safety of users. According to organizers, the 2014 SyScan360 Tesla crack challenge aims to raise awareness for user security hardware products. Previously, the company discovered that 360 Tesla Motors application flow had a design flaw, but the impact caused by the vulnerability isn’t too serious. All the owner needs to do to prevent the flaw is to turn off the remote control, which effectively resists the vulnerability. 360 submitted details and solutions to Tesla and will continue to provide technical support to help fix the vulnerability.

2014 SyScan360 is sponsored by SyScan, a 360 contractor company, focusing on information security technology, also known for working on security hotspots for PC, mobile, intelligent hardware and other fields. Security experts are working together to develop world leading security research.